Methods
We retrospectively reviewed medical records of the patients who had received either robotic or laparoscopic single port anterior resection for the treatment of their sigmoid colon cancer at Yonsei University Severance Hospital, Seoul, Korea from 2008 to 2011. Clinical parameters were statistically compared between robotic and laparoscopic group.

Results
Total 69 patients (37 robotic, 32 lap) were enrolled. The general patient characteristics including age, sex, BMI were not different. Short term operative outcomes such as TNM stage, tumor size, hospital stay, overall morbidity were similar in both group. Total operative time (skin-to-skin) were similar (161.9 min in robotic vs. 167.4 min in lap), however when robotic console time was significantly shorter (105.9 min) than laparoscopic time (127.8 min; P=0.017). Total number of retrieved lymph nodes was not different, but the number of cases where less than 12 nodes were retrieved was significantly higher in lap (5 cases) then in robotic (2 cases; P=0.018). Estimated blood loss was less in robotic (44.1 mL) than in lap (91.2 mL; P=0.039). However incision length were higher in robotic (3.8 cm) than in lap (3.4 cm; P=0.001).

Conclusions
Our initial experience showed both robotic and laparoscopic single port anterior resection were feasible and safe. Robotic approach seemed to have some benefit over laparoscopic approach except longer incision. Further investigation including cost analysis is mandatory to confirmative results. 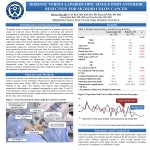