METHODS AND PROCEDURES – Between May 2008 and August 2012 a total of 48 robotic gastric procedures were performed in our department by a single team. 20 patients (10 female, 10 male age 56.3±13.3)) underwent robotic total gastrectomy: 15 for advanced gastric adenocarcinoma and 5 for non-Hodgkin lymphoma. In all cases a D1+β or D2 lymphadenectomy was performed according to the guidelines of the Japanese Research Society for Gastric Cancer. A preliminary laparoscopic exploration was done in all cases to exclude metastatic disease. The standard reconstruction method was Roux-en-Y eso-jejunoanastomosis using stapling devices. In 14 cases bowel continuity was restored extracorporeally by an end-to-side eso-jejunoanastomosis using a 24 or 25 mm circular stapler and in 6 cases intracorporeally using in 3 cases a double stapling technique and in 3 cases a side-to-side (overlap) technique.

RESULTS –The analysis of operative time and docking time showed a decreasing trend in first 10 cases corresponding to the learning curve. The mean operative time and the mean docking time in the first 10 cases vs. the last 10 cases was 350±43.5 vs. 235±48.9 (p-value=0.023) and 18±5.2 vs. 8±2.4 (p-value=0.035) respectively. The mean blood loss was 85±43.2 ml. There was no statistical difference in operative time between extracorporeal vs. intracorporeal anastomosis (p-value=0.32). There were no conversions or intraoperative problems related to the anastomosis procedure. The mean number of harvested lymph-nodes was 29.2±7.5. Resection margins were negative in all specimens. No surgery-related morbidity and no 30-days mortality were reported. The liquid diet was started 3 day postoperative. The mean hospital stay was 6.5±2.3 days. Planned chemotherapy was started within 3 weeks from surgery.

CONCLUSIONS – Robotic total gastrectomy offers excellent short-term outcomes with no delays in starting planned postoperative chemotherapy. Robotic platform significantly improve the suturing inherent to intracorporeal reconstruction, compared with laparoscopic approach, decrease the risk of traction injuries and increase the number of total intracorporeal esophagojejunostomy. Intracorporeal side-to-side (overlap) technique is especially suitable for reconstruction in the case of a narrow and long esophagus while double stapling technique should be used in case of a short esophagus. Intracorporeal anastomosis during robotic total gastrectomy shows comparable early postoperative outcomes and should be the method of choice particularly in obese patients. 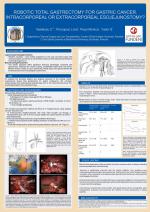