The University of Tokyo

BADKGROUND: Advantages of robotic surgery over conventional laparoscopic surgery includes enhanced dexterity, three-dimensional field of vision, and more intuitive instrument manipulation. These advantages seem to benefit when applied in the surgery for rectal cancers. In rectal cancer surgery, we need to preserve fine network of nervous system to prevent postoperative urinary and/or sexual dysfunction. For anal function, meticulous procedure in dividing between internal and external sphincter muscle is essential when ultra-low anterior resection or intersphicteric resection is performed. Another possible application of robotic surgery may be for lateral lymph node dissection. In lateral lymph node dissection, increased freedom of instrument movements and enhanced dexterity of robotic surgery may help to complete thorough lymphadenectomy. Therefore, we have introduced robotic surgery in the treatment of rectal cancer. In the present study, we aimed to clarify the short-term outcome of robotic surgery for rectal cancer.

METHODS: A series of 14 consecutive patients with robotic resection for primary rectal cancer were analyzed. Abdominoperineal resection or Hartmann’s procedures were excluded. We used 6 ports and dual docking method. In the first 9 cases, we used the robotic arm 3 by the right hand of the surgeon during the pelvic procedure by placing the port in the right lower abdomen of the patient. However, from the 10th case, we have been using the arm 3 by the left hand by placing the port in the left lower abdomen to avoid collision of robotic arms during the pelvic procedure. All procedures were performed by a single surgeon. Clinical outcomes were reviewed retrospectively.

RESULTS: All patients underwent anterior resections including two cases with intersphincteric resection. There were 6 male patients and 8 female patients. The mean operative time was 301 min, the mean set-up time 15 minutes, the mean console time 274 minutes and the mean blood loss 17 gram. Lateral lymph node dissection was performed in two cases. In all cases, robotic procedures were completed without conversion to laparoscopic or open procedure. Morbidity rate was 14% (2/14). Two patients developed pneumohypoderma, which disappeared 2-3 days after surgery. No case developed anastomotic leak. Margin clearance was obtained in all patients.

CONCLUSIONS: Robotic surgery could be performed without any major complications. After we changed the port placement of the robotic arm 3 from the right lower abdomen to the left lower abdomen, collision of robotic arms decreased dramatically and the arm 3 could be used more effectively to keep the good operating fields. Robotic approach compared to laparoscopy allowed better ergonomics and more refined dissection. These advantages helped easier preservation of hypogastric nerves and less blood loss. There were only two cases that underwent lateral lymph node dissection. However, in these two cases, lateral lymph node dissection could be performed more easily as compared laparoscopic approach. Also, in two cases who underwent intersphincteric resection, dissection between internal and external sphincter could be performed more easily than in laparoscopic approach. Although the number of patients is small, these results suggested the usefulness of robotic surgery for rectal cancer. We believe that long-term outcomes both from oncological and functional aspects need to be assessed in further analysis. 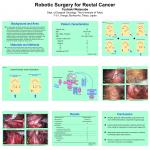