Introduction- The objective of this retrospective review is to analyze the operative and post-operative outcomes of Robotic Single Site Cholecystectomy (RSSC) performed in a high volume robotic center. Single Site Laparoscopic surgery has shown decreased parietal trauma and improved cosmesis but with the restraints of lack of triangulation, cross-handling, and instrument collision. Robotic Single-Site surgery effectively overcomes these technical pitfalls of Laparoscopic single incision surgery with a shorter learning curve while maintaining the advantages.

Materials and Procedures- After a University of Miami Institutional Review Board approval, we retrospectively collected data of all Robotic Single Site Cholecystectomies (da Vinci Si Surgical Robot System, Intuitive Surgical, CA) performed at our center from April 2012 through September 2013. All the patients in this study underwent RSSC for gallbladder disease such as cholecystitis, symptomatic gallstones and biliary dyskinesia.

Results – One hundred and twenty three patients underwent Robotic Single Site Cholecystectomy at our hospital over an 18-month period. The mean age of the patients was 53 years (+/-17.46). 79% of the patients were female and the mean BMI was 27.3 +/-4.6. Eighty-five patients (69%) belonged to ASA class 2 and 26 patients (21%) to class 3. The most common indication for surgery was chronic cholecystitis (n= 100, 81%).
The mean operating time (MOT), including robot-docking time was 49 min (+/-17.1). The average length of hospital stay (LOS) was 0.79 days (0-6), with 56% of the cholecystectomies performed as outpatient procedures. The conversion rate was 6.5% (n=8), of which 4 cases were in the first 20 performed cases. Post-operative complication rate was 5.6% (n=7), of which 2 patients had a bile leak requiring ERCP and stenting. There were no mortalities.
On subset analysis, mean operating times and length of stay were not significantly different when patients were analyzed on the basis of age (<65 and >65 years) or BMI (<30 and >30). The length of hospital stay was significantly more for patients belonging to ASA class 3 or 4, as compared to ASA 1 or 2 (0.64 vs1.3days p<0.01) while the operating times were comparable between the 2 groups (45.5 vs 49.8min p=0.26). The complication rate was comparable among all the above-analyzed groups. Conversion rate was higher in patients with BMI >30 when compared to <30 (13% vs 3.6%).

Conclusions- Robotic Single Site Cholecystectomy can be safely performed with low operating times and low conversion and complication rates, even in older patients and those with high operative risks. High BMI is associated with higher conversion rates. Operating times and complication rates in this study are low when compared to large reported series on Laparoscopic Single Site Cholecystectomy. We believe that the addition of robotic platform will improve the widespread use of Single site surgery. 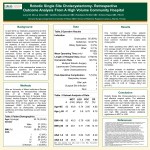