Methods: We performed a retrospective analysis of prospectively recorded data from a REDCap™ database to identify all minimally invasive distal pancreatectomies from January 2008-June 2017 (n=250).  One patient was excluded for undergoing simultaneous HIPEC therapy leaving our total number of minimally invasive distal pancreatectomies at 249.  All pathologic margins were analyzed according to the Leeds Pathology Protocol (LEEPP) which results in higher rates of margin positivity than traditional neck margin evaluation.  Statistical analysis was performed using STATA® software using a combination of Wilcoxon rank-sum and Pearson’s chi-squared tests.

Results: Of the 249 minimally invasive distal pancreatectomies performed at our institution, 135 were performed laparoscopically, and 114 were performed with robotic-assistance.  Females were more likely to undergo a robotic-assisted procedure (p=0.034).  Additional demographic variables and indications for procedure were similar between groups [Table 1].  Overall, 22.9% of patients underwent distal pancreatectomy for adenocarcinoma. Splenic preservation occurred more often in the robotic-assisted group (p<0.001), and operative time was shorter in the laparoscopic group (p<0.001).  Additional outcomes were similar between groups [Table 2].  Of the 58 total patients with adenocarcinoma, a greater number of lymph nodes was evaluated in the robotic cohort (p=0.039).  Additional outcomes in patients with adenocarcinoma were similar [Table 3]. 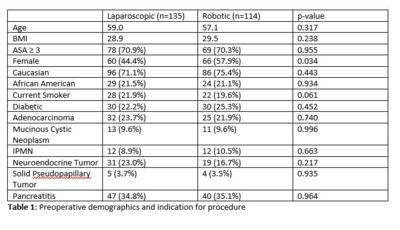