Robotic-Assisted Laparoscopic Surgery: The Experience of a Resident

Introduction: Robotic surgery is an adjunct method of laparoscopic training that can be safely performed by residents. Surgical residencies are unique as they require not only attaining knowledge, but also technical skills. The newest extension of minimally invasive surgery is robotic surgery. As a hotly-debated topic, it is difficult to gain exposure to robotic training. Laparoscopic skills are very similar to robotic ones. However, there are nuances for robotic surgery that require specific training outside of laparoscopy. While training, certification in robotic surgery can be obtained by completing didactic and laboratory sessions to become familiar with robotic technology. In addition, a training surgeon must perform cases as the bedside assistant and as the console surgeon.

Method: All procedures were performed electively between July, 2015 and June, 2016 by a single surgical resident under supervision from two attending surgeons in two institutions with a da Vinci SI robotic platform. The first assistant was another resident. All patients were given the option for non-robotic laparoscopy. The patients who selected the robotic approach were included in this study and data was collected prospectively. Those who selected laparoscopy were excluded.

Results: We planned 19 cholecystectomies, 1 enterolysis, 1 gastrectomy and 1 esophagogastrectomy. Of the 22 surgeries, we performed 21 with the robot and 19 were completed as planned. One cholecystectomy was aborted due to inflammation and a cholecystostomy tube was placed. The gastrectomy was aborted as a small metastatic lesion was encountered after dissecting into the lesser sac. The majority of the abdominal portion of the esophagogastrectomy was performed with the robot until ligating the left gastric pedicle. It was converted to open due to radiation changes. The operative time was not outside the standard range. The only complication was a cystic stump bile leak that presented 2 weeks after surgery. There were no mortalities.

Conclusion: In this series, we provided evidence that robotic surgery can be safely performed by residents without added time. The morbidity and mortality rates were 4.7% and 0%, respectively. In the General Surgery world, two topics guaranteed to spark discussion are residency training and robotics. Many surgeons feel that duty-hour limitations have led to inadequate surgical education and operative experience. There has also been pushback to the inclusion of robotics in General Surgery. Most studies have shown similar outcomes between laparoscopic and robotic surgery with higher cost for robotic surgery. However, this technology is still in its infancy. 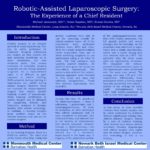