INTRODUCTION: Bariatric Surgery remains the most reproducibly efficacious treatment for morbid obesity. Despite the elevated surgical risk generated by obesity-related co-morbidity, complications rates are lower in those undergoing bariatric operations than in those undergoing other types of surgery1. Nonetheless, quality measures which may reduce adverse outcomes remain a constant focus.

Bleeding is a perioperative and postoperative sequela that is common to all modalities of surgical practice. Essentially all surgical bleeding complications may be considered potentially-preventable. The objective of our study is to identify factors involved in perioperative care of Bariatric Surgery patients that are predictive of postoperative bleeding.

METHODS: We performed a retrospective review of patients who underwent a Sleeve Gastrectomy (VSG) or Gastric Bypass (GBP) at Temple University Hospital between 1/1/2010-12/31/2015. Patients with a postoperative bleeding complication were compared to those who did not have postoperative bleeding. Variables in our univariate analysis included patient demographics, medical history, use of staple-line reinforcement, and preoperative, intraoperative, post-anesthesia hemodynamics.

RESULTS: 792 index Bariatric operations (541 GBP, 251 SG) were performed during the study period. 40% were Black and 24% Hispanic. There were 214 complications (all cause, 1-year morbidity) in 145 patient patients (18.3%). 12 patients (1.52%) had a postoperative bleeding complication, 1.48% (8) GBP and 1.59% (4) SG.  Of those with a bleeding complication, 75% (9) required a re-operation (p<0.001) and were more likely to have another complication (33% vs 17%). Gender, race/ethnicity, operative time, staple type, use of staple reinforcement, and type of operation did not significantly impact predisposition to bleeding. Variables that met or trended toward a significant association with postoperative bleeding are listed in Tables 1&2. Patients with postoperative bleeding were generally older, had a lower BMI, poorly-controlled perioperative SBP, and used more than one anti-clot medication.

CONCLUSION: Bleeding is a potentially devastating complication following bariatric surgery. Several patient-related, technical, and perioperative variables may be contributing factors. The findings presented here suggest that advanced age, a lower BMI, use of NSAIDs and anti-platelet medications, and perioperative management of hypertension may be associated with bleeding in our ethnically diverse patient cohort. Further research is required to identify independent-predictors for bleeding in this patient population. 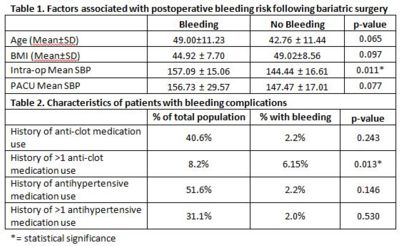