Ring dysfunction after roux-en-y gastric bypass (RYGB) causing delayed gastric emptying is classically treated by surgical removal, a procedure with risk of complications and weight regain. In a novel way of using self-expandable stents, intraluminal erosion of the ring is achieved, allowing removal by endoscopy, with no need of surgery. No study has shown clinical applicability of this principle in RYGB banded with silastic ring. We analyze endoscopic removal of non-eroded dysfunctional rings after RYGB using self expandable plastic stents (SEPS).

This is a prospective case series of 24 patients managed with SEPS placement, between 2007 and 2012. Successful ring removal, symptoms improvement, weight control and adverse events were evaluated.

Delayed gastric emptying was defined as inability to ingest meat or vomiting episodes with or without gastric pouch stricture. Mean age was 43.2 years, most were female (n=18), median BMI at treatment was 24.5 Kg/m2. Most common symptom was vomiting (n=23), with daily occurrence in 52.2%. Stricture was present in 62.5% and ring slippage in 8.2%.

SEPS placement was done under general anesthesia and fluoroscopic guidance. A standard gastroscope (Pentax Medical, Montvale, NJ), and a PolyflexTM stent (25x21x150mm) (Boston Scientific, Natick, MA) were used in all cases. When there was severe stricture or ring slippage, a previous endoscopic dilation was done, using a TTS balloon (18 mm). 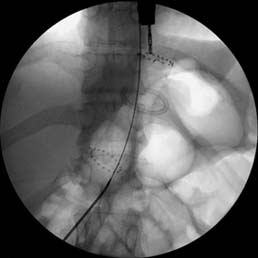 All patients were discharged after a 2-hour observation period, with liquid diet for one week. PPIs were prescribed from stent placement until one month after removal. Stent removal was done under deep sedation, by anesthesiologist.

SEPS induced complete erosion in 16 patients, allowing simultaneous stent and ring removal. In the remaining patients, the ring was removed two weeks later, after complete erosion. The median time of stenting was 15 days. There was one case of stent migration, which was naturally expelled. Most patients needed endoscopic stricture dilation after stent removal (91,2%), with a mean of 2 sessions. Most common adverse event was vomiting (n=6), treated with symptomatic medications. There was no early stent removal, and no serious complications. After a mean follow-up of 7 months, there was no significant change in BMI, and 75% of patients were able to ingest solid foods. (Table 1) 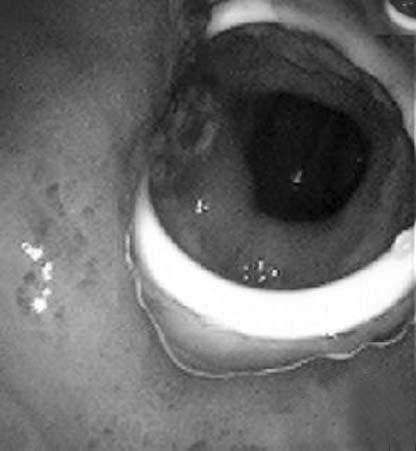 Endoscopic stents led to ring intraluminal erosion in 100% of subjects, allowing successful removal of dysfunctional rings. The procedure is technically feasible and safe, with a 25% occurrence of mild adverse events (vomiting), and no serious complications. It proved to be a reasonable alternative for ring removal in our casuistic, avoiding surgery, and decreasing possibility of weight regain. More studies with a larger number of subjects are needed to confirm our findings. 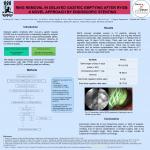