We present the first 3D traditional laparoscopic surgical procedure performed in the North East independent of a robotic surgical system. The Olympus Articulating HD 3D Endoscopy System delivers value to surgeons and patients by reducing surgical errors and improving the speed, accuracy and precision of surgical tasks such as dissection, grasping, and suturing. When compared with traditional 2D surgical systems, based on internal Olympus testing using a simulated surgical model, 3D dissection outperforms traditional 2D systems nearly every time. This is accomplished by restoring natural 3D vision and depth perception when performing laparoscopic procedures that is independent of a surgeon’s skill level. The Olympus HD 3D system is ideal for suturing, accurately identifying tissue planes and other precision surgical tasks that are required in every laparoscopic surgical procedure. In addition to the 3D HD camera, the Olympus endoscope also provides a 360-degree articulating head, enabling any surgeon to obtain critical view of anatomical structures in difficult viewing fields within the abdomen, without losing the important visual horizon. 3D depth perception was never possible with traditional laparoscopes, and as such, the revolutionary Olympus 3D Endoscopy System proves to be an asset in any operating room. The following procedure, better known as a revisional Sleeve Gastrectomy, is also a particularly unique procedure in it own right. Due to the lack of a Olympus 3D HD monitor at the SAGES EMERGING TECHNOLOGY MEETING the following surgical video has been converted from a 2D file to a 3D file to closely mimic the visual representation with standard 3D (red/Blue) glasses. 3D glasses will be provided to the audience during the time of the presentation to view the video in 3D. 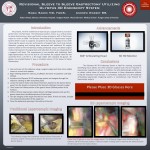