INTRODUCTION – The objective of this study is to compare the efficacy and short-term outcomes of Robotic Paraesophageal hernia Repair (RPR) with the standard Laparoscopic Paraesophageal hernia Repair (LPR) in a high-volume community hospital. Laparoscopic elective repair is currently the standard of care for treating paraesophageal hernia. Robotic surgery overcomes the potential pitfalls of conventional laparoscopy by providing excellent steady-state 3D visualization, precision maneuverability, and superior ergonomics. Its role is especially promising in technically complex surgical procedures involving a confined surgical field, like the esophageal hiatus.

METHODS AND PROCEDURES – This was a retrospective cohort study. 34 patients with Paraesophageal Hernia who underwent Robotic Paraesophageal Repair using the da Vinci Surgical Robot System (Intuitive Surgical, CA) between January 2010 and August 2013, and 9 patients who underwent Laparoscopic Paraesophageal hernia Repair during the same time frame were included in the study. Patient demographic characteristics such as Age, Sex, Body Mass Index (BMI), and American Society of Anesthesiologists (ASA) classification, as well as clinical data (Type of Paraesophageal hernia and Indications for surgery) were obtained from chart review and analysis. Mean operative time, Conversion rate, Post operative complications, Mortality, and Length of hospital stay were the main outcomes, which were analyzed between the two groups using the student t-test.and chi-square test.

RESULTS – Demographics were comparable between the two groups. The mean age of the patients was 69.7 years in the RPR group and 76.8 in the LPR group, and the Mean Body Mass Index (BMI) was 28.5 and 27.6, respectively. Since the introduction of the Surgical Robot system in our institution in February 2011, 83% of these cases were performed robotically, accounting for the lower number of cases in the LPR group. There was no statistically significant difference between robotic and laparoscopic paraesophageal hernia repair in terms of mean operative time [86.2 mins vs 90.2 mins, p = 0.68] and length of stay [3 vs. 4.3, p = 0.26]. There was one conversion (2.9%) and one mortality (2.9%) in the RPR group. The frequency of postoperative complications was lower in RPR vs LPR [14.7% vs 22%)

CONCLUSIONS – Robotic paraesophageal hernia repair is safe and associated with better outcomes. The operative time and length of stay is comparable to standard laparoscopic repair. The robotic approach is becoming more popular, as is evident by the dramatic replacement of laparoscopy with robotic paraesophageal hernia repair in our institution, which could be attributed to the shorter learning curve and technical advantages of robotic surgery. Future studies need to be done to compare the cost-effectiveness of the two approaches. 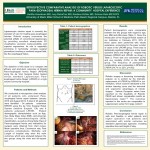