Patients & methods: Retrospective analysis. The study period is Jan 2002 – Dec 2006 (5y). The data were obtained from medical records. The patient inclusion criteria were resection of primary CRC including synchronous or metachronous cancer. Exclusion criteria were recurrent CRC, cancer not operated, cancer not resected and endomucosal resection. LNH and LNI were obtained. The data were analyzed and compared with literature and national audit.

When correlation was determined between LNH and lymph node involvement, it revealed a low correlation (r=0.16 p=0.06). When the national audit calculated the same relationship among its much larger sample the results were the same (r=0.15 p=0.001).

Conclusion: LNI as a function of tumour and host behaviour is of prognostic significance. LNH is dependent on multiple factors and may be a quality assurance (QA) tool to be used to compare inter-institutional standard of multi-disciplinary meetings (MDM) 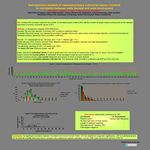