Retention of Benefit: Laparoscopic Appendectomy in the Gravid Female

Introduction:
Pregnant women undergoing surgery are at elevated risk of surgical complications. Changes in vascular physiology, danger to the fetus, and rare necessity to operate in these patients creates a mystique and surgical discomfort that pervades today. Little data exists on surgical outcomes in gravid patients due to the relative rarity of the need for surgery in this typically young and healthy population. The most common reason for operating on pregnant women in ACS National Surgical Quality Improvement Program (NSQIP) is acute appendicitis, and this study sought to elucidate outcomes in this patient population.

Methods:
The 2005-2010 NSQIP database was queried for pregnant patients (a variable within NSQIP), and cases of appendectomy using Common Procedural Terminology Codes (CPT) for open and laparoscopic appendectomy (CPT= 44950, 44970). Relevant outcomes were life threatening complications, incisional infections, operative time, and length of stay. Univariate analysis was performed for each end point using chi-square, Student’s T-test, and Fisher’s Exact test where appropriate. Factors with p value<0.1 were included in multivariate logistic or linear regression as appropriate. A 2-sided p-value of 0.05 was considered significant.

Conclusions:
Gravid females who undergo appendectomy may benefit from a laparoscopic approach due to decreased incisional infections, decreased length of stay, decreased operative time, and a trend towards lower major complication rates. Predictors of major complications include ASA class and resident involvement in the case. This data is limited by lack of data on fetal outcomes, and stage of pregnancy. Overall outcomes were similar to a matched cohort, suggesting appendectomy in pregnant women is safe for the mother when necessary. 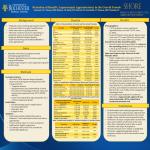