Introduction: Hydrothorax is an uncommon but significant complication of peritoneal dialysis catheter use resulting from pleuroperitoneal communication. Attempts at non-operative management have limited efficacy. Although surgical repair has been traditionally performed with chemical pleurodesis or open thoracotomy with defect repair, these methods have associated morbidities. We present a case of a diaphragmatic defect repaired with pledgeted sutures using both thoracoscopic and laparoscopic approach.

Case description: A 35 year-old male with a history of end-stage renal disease, hypertension, hyperhomocystinemia, and ruptured appendicitis presented with dyspnea and findings of right-side hydrohorax following peritoneal dialysis. The patient had previously exhausted all hemodialysis access sites to both upper extremities. A chest x-ray confirmed worsening of a right sided pleural effusion following dialysate infusion. A peritoneogram was performed with contrast instillation through the dialysis catheter that confirmed a centrally located diaphragm leak. Attempt was first made to perform laparoscopic repair. A small linear defect was visualized with the laparoscope after insufflation within the central tendon of the right hemidiaphragm which was posterior to the dome of the liver. Due to inability to gain access to this area for repair, a thoracoscope was then inserted in the right chest. The defect was found by instilling water into the chest and observing air bubbling up from the abdomen. Pledgeted EndoKnot suture was then used for repair of the defect with fibrin glue incorporated into the knots. Following the procedure, the patient recovered expeditiously. Several months following this procedure, his peritoneal dialysis catheter was replaced laparoscopically. Two weeks later, he was successfully using his dialysis catheter and has not had further complication.

Discussion: Peritoneal dialysis is the best option for some patients with end-stage renal disease, such as those that desire independence and those that may be limited from other forms of dialysis access. Loss of diaphragm integrity resulting in hydrothorax is a complication that may prevent further use. Surgical repair has typically been performed with pleurodesis or thoracotomy with primary repair. Although often well tolerated, these methods may pose risk for the patient, including respiratory complications and difficulty with repair of a recurrent defect. This case presents a surgical approach for repair of a pleuroperitoneal communication allowing localization, pledget enforced repair, minimally invasive technique, and with potential for early return to peritoneal dialysis use. 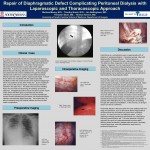