Background: The bile leakage after hepatectomy and the biliary tract operation make surgeon awfully uncomfortable. The preoperative evaluation of the run of the bile duct is important, but the existence of the Luschka’s duct does not often become clear with ERCP, MRCP, DIC-CT either. We experienced bile leakage due to Luschka's duct injury during laparoscopic cholecystectomy and repaired the injury under the laparoscope. We show the repair method.

Case: case 1) 84 y.o. female, gangrenous cholecystitis. The laparoscopic cholecystectomy with 4 ports was performed. There was bile leakage from liver bed after gallbladder extraction. I repaired it by clipping and a liver suture. case 2) 72 y.o. female, acute cholecystitis. Single incision-style laparoscopic cholecystectomy. Similarly, there was the bile leakage from bile duct crawling on liver bed. There was not a connection with the liver parenchyma and we took it as the Luschka’s duct. We were able to finish a single incision-style operation by clipping it. Postoperative progress was good at both cases and there were no bile leakage.

Result: In the case of cholecystectomy to an acute cholecystitis, It is often with all layer excision in a liver bed due to influence of inflammation. It cause us to injure the Luschka’s duct crawling on the liver bed. However, we can confirm the Luschka’s duct injury if observing it carefully, and it is thought that we become rarely troubled postoperative bile leakage.

Conclusion: As for the intraoperative Luschka’s duct injury, the repair under the laparoscope is possible. 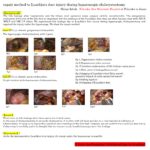