INTRODUCTION
Renal blood flow during Laparoscopic Donor Nephrectomy is poorly documented. This is important because there is concern about the effects of arterial spasm on renal perfusion during mobilization and dissection of the renal artery. Some surgeons feel it is important to give the donor kidney a period of rest after complete mobilization prior to delivery. The purpose of this study is to identify changes in renal parenchyma perfusion by Restrictive Index (RI) during Laparoscopic Donor Nephrectomy, before and after renal artery dissection.

CONCLUSION
In this preliminary evaluation it appears that arterial dissection does reduce renal perfusion. The effects lasted up to 20 minutes.  We are actively obtaining more data for this study.  Until further data is acquired the authors recommend a post arterial dissection rest period of at least 20 minutes prior to harvest and delivery of the organ so that normal arterial flow is reinstated prior to harvest. 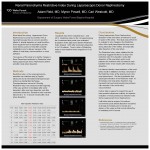