Introduction: Traditional methods of herniorraphy have unacceptably high recurrence rates. Posterior component separation herniorraphy via transversus abdominis release (TAR) has a recurrence rate of only 4.7% at 26 months follow up.  To date, no data has been reported delineating the reduction in tensile force required to reapproximate midline fascia after TAR.  Furthermore, a laparoscopic approach at TAR could provide a minimally invasive and less morbid herniorrhaphy.  We hypothesized that open TAR reduces midline tensile forces, that laparoscopic TAR is feasible, and that laparoscopic TAR provides similar reductions in midline tension to open TAR.

Methods: In an anesthetized porcine model, a 20cm midline incision was made and bilateral lipocutaneous flaps were raised to expose the anterior rectus fascia.  Five stainless-steel hooks were placed in the fascia at 1cm intervals lateral to the midline 5cm above, at, and 5cm below the umbilicus (Figure).  Baseline force measurements were taken by pulling each point to the midline.  A temporary laparotomy closure was applied.  Laparoscopic TAR was performed unilaterally by incising the parietal peritoneum 10cm lateral to the midline and dividing the transversus muscle along its entire length.   Subsequently, open TAR was performed on the contralateral side.  Repeat force measurements were then taken. Comparisons were made before and after TAR and between the open and laparoscopic groups.

Conclusions: Laparoscopic TAR provides superior reduction in midline closure force compared to open TAR, likely as a result of a longer and more complete muscle release capable through the laparoscopic approach used in this model. Interestingly, open TAR reduced midline tensile force in only 20% of the locations tested, suggesting that the mechanism by which open TAR facilitates herniorraphy may not be entirely through simply reducing tension on the reconstructed linea alba. 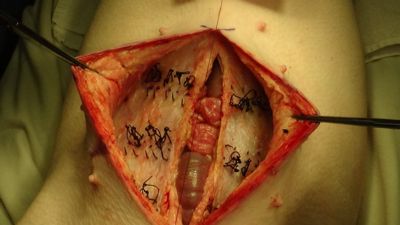