Purpose: Total abdominal colectomy (TAC) is the definitive treatment for patients with severe acute ulcerative colitis (saUC) and has historically been performed in an open (OS) fashion. Minimally invasive approaches (MIS) are standard for many colorectal procedures. Reduced port laparoscopic surgery (SILS+1) is a variation of traditional laparoscopy (LS) to reduce incisions, post-operative pain, and facilitate a faster recovery. The objective of this study is to determine if the SILS+1 approach in patients with saUC is comparable to OS and LS approaches.

Conclusions: Early outcomes with SILS+1 show that this technique can be performed safely in patients with saUC and may yield benefits over open surgery, including decreased EBL, shorter LOS, and increased likelihood of subsequently undergoing MIS IPAA surgery. 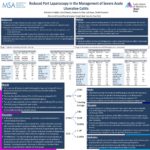