Patients and Methods: A surgeon performed O-RPLATG for 5 patients with gastric cancer, who experienced more than 60 cases of conventional LATG. In this study, surgical technique was described and short-term outcomes were evaluated.
Surgical technique: A OCTO-port has 4-ports inside (two 5mm-port; one 12mm-port; one size changeable-port). A 50mm-OCTO was introduced at the umbilicus by making a 4-cm of small skin incision. Additionally, a 12mm- port was introduced at the right lateral abdomen. A energy device was mainly inserted from the right abdomen port or the upper portion of the OCTO-port. Infrapyloric lymph nodes were eliminated by the both hands and the duodenum was divided by a linear stapler to make a fine operative view. Suprapyloric lymph nodes were dissected after revealing the proper hepatic artery to confirm anatomical orientation. Left hand is available for suprapancreatic lymph node dissection from the right abdomen port. Particularly, lymph nodes along the proximal and the distal splenic artery could be more accurately dissected by the left hand. In this manipulation, it is possible to reveal the Toldt fusion fascia and subsequently the Gerota fascia. Roux-en-Y reconstruction was intracorporeally performed with the OrVilTM (transorally inserted anvil) by hemi-double stapling technique.

Results: There was no significant difference in mean operation time (295.6ml) and blood loss (115.8 ml) as compared to those in the conventional LATG. Moreover, the incidence of postoperative morbidity did not differ between the two groups.
Conclusion: O-RRLATG may be one of useful technique for gastric cancer due to its surgical safety and cosmetic benefit. 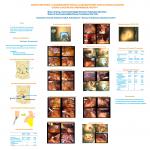