INTRODUCTION: Single incision laparoscopic surgery is increasingly being performed for cosmetic reasons and is commonly used for cholecystectomy and appendectomy. Reduced port surgery may assist in difficult cases or complicated cases. We performed a cholecystectomy using reduced port surgery (single incision laparoscopic surgery plus one port) in a patient who was 21 weeks pregnant and had a history of laparoscopy-assisted distal gastrectomy (LADG) for early gastric cancer.

METHODS AND PROCEDURE: The patient was a 31-year-old woman with a gall bladder polyp which had increased in size from 8mm to 13mm in diameter over a 1 year period. Nine years previously she had undergone a LADG with lymph node dissection for early gastric cancer, and 4 years ago had a hemi-thyroidectomy for papillary carcinoma. A 3 cm skin incision was made in the cranial side of the umbilicus and EZ accessTM and Lap-ProtectorTM (Hakko Co. Ltd., Nagano, Japan) were used as single-access system. Three trocars were inserted through this system. The laparoscopic findings demonstrated an omentum with major adhesions to the gall bladder. The 12 mm trocar was inserted through the LADG skin incision scar.

RESULTS: The patient underwent cholecystectomy successfully. Operation time was 97 min without blood loss. The patient was discharged from hospital on post-operative day 4 without any complications. Histological examination revealed the polyp was not neoplastic.

CONCLUSIONS: Due to the pregnancy, the uterus was enlarged up to the umbilicus level, and the site of the first incision required careful selection. For safety reasons, a multi-channel system is superior to multiple port insertion through a single incision. To reduce operation time and avoid compression of the uterus, another port in the previous skin incision was useful without spoiling the cosmetic outcome. 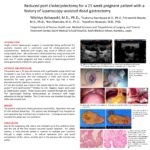