Bariatric surgery is the most effective method for producing sustained weight loss and improving weight-associated comorbidities in the morbidly obese population. The Roux-en-Y gastric bypass is among the most common and effective operations available, and is routinely performed laparoscopically. The red cell distribution width (RDW), a marker of size dispersion of circulating erythrocytes, is an emerging marker of inflammation usually reported as part of the routinely obtained pre-operative complete blood count.  In this study, we tested our hypothesis that RDW represents a biomarker independently predictive of excess body-mass index loss (EBMIL) following laparoscopic Roux-en-Y gastric bypass (LRYGB).

Five hundred and forty-seven included LRYGB patients from a single institution were individually reviewed, noting both pre-operative RDW and percent excess BMI loss at six months and one year post-LRYGB (%EBMIL180 and %EBMIL365, respectively). Bivariate and multivariate linear regression analysis was conducted between age, gender, initial body-mass index (BMI0) and RDW and each of the two endpoints, to assess the independence of RDW as a predictor of post-operative success.

RDW is independently predictive of EBMIL at one year following LRYGB. This represents a novel, inexpensive and readily available pre-operative biomarker that may provide clinically useful prognostic information for the patient and bariatric care team. 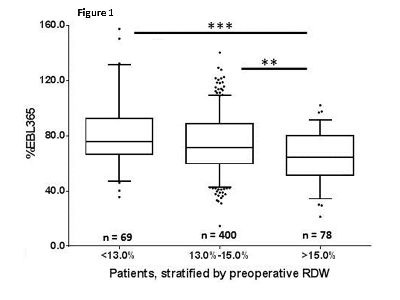