RESULTS –  The mean operative time for the 27 patients was 312 min, and the estimated blood loss was 113g. One patient who had anastomotic leakage at the esophagojejunostomy recovered by conservative treatment. Another patient who developed anastomosis stenosis was successfully treated by endoscopic balloon dilatation.

CONCLUSION – The circular stapling esophagojejunostomy using OrVilTM facilitates insertion and fixation of Anvil head. Also, this procedure does not depend on patients’ physical status and can be applied for high-level anastomosis. 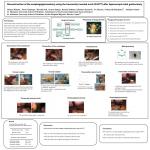