Introduction: Laparoscopic repair has been shown to be safe and effective in the management of ventral hernias. As inpatient reimbursement decreases, outpatient laparoscopic ventral hernia repair (LVHR) has become more common, but there is little data to assess outcomes with this approach. The aim of this study was to evaluate short-term outcomes and readmission rate after outpatient LVHR.

Methods: The NSQIP database was queried for all LVHR performed in 2011 based on CPT codes. Outpatient procedures were isolated using specific variable and null length of stay. Univariate and multivariate analysis was conducted to determine predictors of readmission in this patient population.

Results: We identified 2856 patients who underwent outpatient LVHR in this time frame. The majority were male (54.1%) with median age of 52 years (IQR 43 – 62). Mortality, serious and overall morbidity were observed in 0.1%, 0.6% and 1.6%, respectively. Surgical site infections were infrequent (0.6%), and so were readmission rates (3.8%). The length of operation did not predict readmission. The only independent predictor of readmission after outpatient LVHR in our study was an American Society of Anesthesiologists score of 3 or 4 (odds ratio 1.78, 95% confidence interval 1.03 – 3.04, p=0.038).

Conclusions: We conclude that outpatient LVHR is performed safely in selected populations, with low complication and readmission rate. Patients with severe chronic systemic disease may benefit from inpatient observation status. 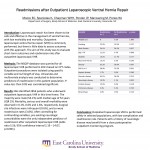