METHODS AND PROCEDURES: Randomized comparative trial was conducted wherein 60 patients above 18 years of age with unilateral inguinal hernia undergoing laparoscopic TEP and TAPP repair were included. Serum TLC(Total leucocyte count) was measured by SYSMEX KX-21 Hematology Analyzer. Serum IL-6(Interleukin 6) and hsCRP(High-sensitivity C-reactive Protein) were measured by ELISA. The patients were randomized prior to surgery with www.randomizer.org. By using block randomization method, they were allocated to undergo either TEP(n=30) or TAPP(n=30).A pre-operative measurement of TLC,serum IL-6 and hsCRP was made from venous sample.Post-operative estimation of systemic inflammatory markers was made 24 hours after surgery. Post-operative pain scoring after 24hours and 7 day was done using Visual analogue scale. Data was analyzed using SPSS version 20 software for Microsoft windows.Variables were analyzed using Mann Whitney test and Wilcoxon Signed Ranks test.

CONCLUSIONS: There is significant rise in the postoperative systemic inflammatory markers after TEP and TAPP. As only IL6 out of TLC, hsCRP & IL6 , was found to be significantly raised in TAPP as compared to TEP so it cannot be stated conclusively that TAPP is associated with more inflammatory response.Post-operative pain decreased on 7th day post surgery in both TEP & TAPP but the pain values were comparatively more in TAPP. 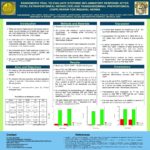