Methods: A total of 20 medical students without surgical experience were recruited. After a standardized training protocol using virtual simulator on laparoscopic suturing and video training, the participants were randomly divided into two groups (n =10 for DVSS and 10 for LS). Each participant would perform five suturing of a 2 cm long gastric perforation with tying of 3 knots using either LS or DVSS. The completeness of closure was assessed by a composite scoring system basing on operative time, accuracy of suturing and knot security. The air bursting pressure for the closed gastric perforation was examined. The performances of participants were assessed by using Global Rating Scale (GRS). The workload incurred was assessed using Administration (NASA) Task Load Index (TLX) questionnaire.

Conclusion: Robotic suturing significantly shortened operative time and improved the security of closure for gastric perforation when compared to laparoscopic suturing. In addition, the workload incurred on the novice surgeon was much smaller when using the robotic system for suturing. 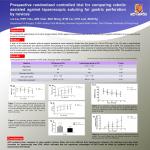