Methods
The study enrolled 23 patients who were diagnosed clinical stage ?~?a and were operated from April 2011 to June 2012 in our hospital. They randomly assigned them to one of two groups (RPLAR:n=11 or 5PLAR:n=12). Data measures were operative time, estimated blood loss, length of hospital stay, adverse events, conversions to 5PLAR or laparotomy, pain and patient satisfaction.

Operative procedure
RPLAR:We make a 15mm vertical incision in the navel. Through the incision we insert two 5mm ports, for the left hand forceps and the scope. And we make a supra-pubis incision in the pubis hair area for a 12mm port using the right hand forceps or the stapler. So these operative scars are almost inconspicuous. We mainly use a oblique-viewing endoscope and straight forceps. So we can prevent the scope and the left hand forceps from interfering in each other. Because the right hand forceps is inserted at the separated position from the navel incision, without using bent forcepses we are able to work under keeping the triangular formation. One or two needle devices usually are required to revolve the organs. After cutting the both sides of the cancer by linear staplers from the anal into the abdomen a Wound Retractor is inserted and the specimen is taken out through it.

Results
No cases in the both groups had adverse events and were converted to other laparoscopic approaches or laparotomy. The two study groups did not differ in terms of patient demographics.

The RPLAR group had a statistically significant longer operative time than the 5PLAR group (182 vs 156min.), by the way SILAR group (224min.) had a longest time than both groups, but no difference in operative blood loss and hospital stay. And there was no difference in the pain score. After 3months later from operation abdominal scars of all patients in the RPLAR group were hardly recognized and these patients had grate satisfactions with their surprises. Both groups were almost same cost to use disposable goods.

Conclusion / Perspective
Compared with 5PLAR, RPLAR is a feasible approach with comparable operative outcomes. We think that longer operative time of RPLAR group is acceptable and RPLAR is well-balanced procedures. 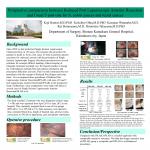