Introduction: The objective was to compare surgical outcomes between obese (BMI >30) and non-obese (BMI<30) patients after single-incision laparoscopic cholecystectomy (SILC). A number of observational studies, case series, case controls, and most recently randomized controlled trials have suggested that SILC is a feasible alternative to conventional laparoscopic cholecystectomy. Few articles have investigated the use of SILC on obese patients, and most studies have specifically excluded patients with high BMIs.

Methods and Procedures: This is a prospective study of 72 consecutive patients that underwent SILC by a single surgeon at a tertiary referral center in 2010 and 2011. There were no exclusion criteria. Endpoints included operative time, estimated blood loss, and percent conversion to conventional laparoscopic cholecystectomy. Complication rates were also evaluated. Statistical analysis was done with Student’s t-test or Mann-Whitney U test, where appropriate. 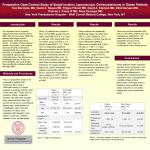