Objective
Cellvizio® (Mauna Kea Technologies, France) is a probe-based high-resolution Confocal Laser Endomicroscopy (CLE) system that fits in standard endoscopes. FLuorescence-based Enhanced Reality (FLER) is a novel technique to evaluate intestinal perfusion based on the use of a Near Infra-Red endoscope (D-light P, Karl Storz®) to detect the Indocyanine Green (ICG) fluorescence signal. Fluorescence intensity is directly correlated to perfusion, and an ad-hoc software (VR-Render® PERFUSION) allows to construct a virtual mapping of the perfused area overlaid on laparoscopic images achieving Augmented Reality.The aim of this study was to assess the ability of the Cellvizio® system, to discriminate mucosa ischemic changes in a porcine model of mesenteric ischemia, and to compare clinical evaluation with Enhanced-Reality to identify the transition from ischemic to vascular areas.

Methods
Six pigs underwent laparoscopic sigmoid segmental ischemia by sealing some terminal arterial branches sparing the Inferior Mesenteric Artery. After 1 hour, the ischemic area was evaluated by clinical assessment and FLER (after injection of 0.5mg/kg of ICG) to determine presumed viable margins based on the serosa aspect. For each sigmoid, 5 regions of interest (ROIs) were identified: ischemic (ROI 1), presumed viable margins ROI 2a and 2b (respectively distal and proximal to the ischemic zone), and vascular areas 3a (distal) and 3b (proximal). After injection of fluorescein, Cellvizio® scanning of the intestinal mucosa was performed starting from the ischemic area and moving towards presumed viable margins. Capillary blood samples were obtained by puncturing the serosa at the ROIs, and capillary lactate was measured using the EDGE® analyzer. Full-thickness biopsies were taken at the ischemic zone and at a control area for standard pathology evaluation.

In 50% of cases, resection lines 2aCLINIC+2bCLINIC were considered to match (<1cm distance) with 2aFLER+2bFLER. In 5 cases, 2aCLINIC+2bCLINIC were closer to the ischemic zone with a mean distance of 2.2cm (SD 1.78) when compared to 2aFLER+2bFLER. Confocal analysis revealed specific clues to identify the ischemic area and the transition from the ischemic to the viable area. An almost constant clue is a blurred image due to the fluorescein lack in the ischemic zone with a sudden change when reaching some vascular area corresponding to the ones identified by 2aFLER-2bFLER in 11/12 cases vs. 7/12 in 2aCLINIC-2bCLINIC.

Conclusions
Confocal analysis showed specific features to identify intestinal perfusion and confirmed that FLER is effective to discriminate the transition zone at the future anastomotic site. FLER was more accurate than clinical evaluation to determine adequate resection lines as expressed by the level of capillary lactates. 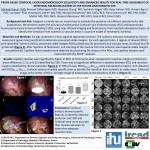