Background and Aim: Primary carcinosarcoma (CS) and sarcomatoid carcinoma (SC) of the liver are extremely rare malignancies composed of both carcinomatous and sarcomatous components. The aim of this study is to clarify the clinical features, sur-gical treatment, and prognosis of patients with primary hepatic CS and SC.

Methods: Between January 1996 and August 2012, 7 and 32 patients were histologi-cally diagnosed as primary hepatic CS and SC, respectively. Their demographic, clinicopathological, and survival data were retrospectively reviewed. 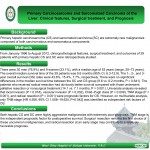