Introduction : In general, Hartmann’s procedure(HP) is considered as a treatment of choice in generalized peritonitis due to left-side colon cancer obstruction with perforation.The aim of this study was to evaluate the short term outcome of primary anastomosiswith intraoperative colonic irrigation(IACI) in the same setting as peritonitis.

Methods and procedures : Prospectively collected data of peritonitis patient with colon cancer obstruction between January 2001 and March 2013 in a single institute were evaluated. Fifty-nine patients who underwent IACI and HP were included in the study.

Conclusion: Primary anastomosis with intraoperative irrigation can be safely performed and reduce permanent stoma in left colon cancer obstruction with peritonitis in comparison with Hartmann’s procedure. 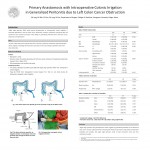