Introduction: As the vertical sleeve gastrectomy (VSG) becomes increasingly popular, its effect on postoperative micronutrients levels, such as thiamine, becomes more important. We previously found a 1.8% prevalence of thiamine deficiency in bariatric patients prior to surgery. The aim of the present study is to determine the prevalence of thiamine deficiency at our center following VSG and to explore possible predictors of postoperative thiamine levels.

Methods: A retrospective chart review was performed on 147 bariatric patients between 18 and 65 years old who underwent VSG between April 2011 and February 2015. Demographics, pre-operative body mass index (BMI), obesity associated co-morbidities, alcohol intake, smoking habits, insurance type, calendar year of the procedure, occurrence of post-operative complications, and compliance with post-operative nutrition and follow up appointment guidelines were extracted. We defined thiamine deficiency as < 78 nmol/L on any lab draw within one year after the VSG. A comparison of the above factors was made between the thiamine sufficient group and the thiamine deficient group after the groups had been matched using a propensity score. Propensity score matching and multivariate logistic regression models were created to analyze the factors associated with thiamine deficiency after bariatric surgery.

Discussion: We found an alarmingly high prevalence of thiamine deficiency in postoperative sleeve gastrectomy patients. This disorder may have serious consequences including Wernicke encephalopathy. Hence, it is important to identify predictive factors including demographics, post-operative complications, and behaviors so that measures can be taken to prevent thiamine deficiency in VSG patients. 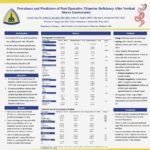