Presentation, Demographics, and Surgical Management of Bochdalek Hernias in Adults.

Background: Bochdalek hernias are congenital diaphragmatic defects that have been well described in the pediatric literature. The first congenital diaphragmatic hernia was described in the 17th century by Lzarus Riverius and first described clinically by Vincent Alexander Bochdalek in 1848. Although treatment has progressed through the use of thoracoscopic repair in 1995 and laparoscopic repair in adults in 1998, reports of Bochdalek hernias in adults remain limited to single patients or small series. In order to better understand this disease process and its management in the adult population, we conducted an extensive review of the literature.

Results: Based on these criteria 166 articles were identified and analyzed. Particular attention was paid to modern surgical techniques used to repair these unusual defects. The average age of patients was 41 (n=163) and 45% of patents were female. Left-sided hernias 78%, right-sided Bochdalek hernias accounted for 20%, and 2% were bilateral (n = 162). Congenital Abnormalities (n=154) were present in 12% of patients. Presentation of symptoms of less than one month duration occurred in 49% of right-sided Bochdalek hernias and 33% of left-sided. Presenting symptoms included strangulation 31% right-sided, 27% left-sided; Obstruction 41% left-sided, 31% right-sided; and pulmonary symptoms 38% left-sided hernias, 34% right-sided. Surgical approach (n=133) utilized included Laparotomy (38%), Thoracotomy (33%), Laparoscopy (11%), and Thoracosopy (3%), Complications rates were found to be 20% for Laparotomy, 14% for Thoracotomy, and 7% for Laparoscopy . Thirty day mortality was found to be 5% for Thoracotomy, 2% for Laparotomy, and 0% for Laparoscopy. 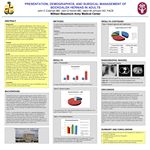