AIM:To establish the method to predict the preferable approach, thoracoscopic or laparoscopic, to the lower mediastinum by preoperative CT scan. 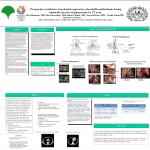