Introduction: Endoscopic submucosal dissection (ESD) is routinely used in Japan to remove large sessile colorectal adenomas and superficial T1 colon cancers. Few American gastroenterologists perform ESD, thus, most large sessile polyps in the US are treated via segmental colectomy. A few surgeons perform ESD in the operating room in conjunction with laparoscopy. If ESD fails, a MIS colectomy or wedge resection is immediately done. It is difficult for a surgeon to become proficient at ESD because the volume of large polyps may be low/sporadic and a good percentage of candidate polyps will not fully lift due to prior hot snare use. To gain ESD experience and skill the authors instituted a training program that includes an inanimate ex-vivo porcine stomach model.

Method: The colon model is a hollow plastic tube with a rectangular cutout “window” well away from the end of the tube. The scope is inserted via an opening in a round sponge that is placed at the tubes end. A rectangular piece of porcine stomach mounted on an electrocautery pad (connected to generator) is placed over the “window” cutout. ESD is done with the same instruments used in humans. This model does not require insufflation and bleeding is not an issue. Each session’s goal is to excise en bloc a 2-2.5 cm circular mucosal “lesion” drawn or burned onto the mucosa.

Results: ESD en bloc lesion excision was completed in 15 of 16 “cases”; with time, the trainees learned the elements of ESD and developed an approach. The mean case duration was 64 minutes (range 32–111), with no time trend noted. The mean number of muscularis propria injuries/case was: partial thickness, 6 (range 0-13); full thickness, 1 (range 0-5). Difficulty maintaining conductivity between cautery pad and tissue was a problem that prolonged most cases. Maintaining the lift was an issue in 69% of cases (mean # sclerotherapy catheter insertions/case, 5 [range 2-9]; mean # injections/case, 17 [range 9-25]). Notable variability in tissue quality and integrity was noted. In general higher cautery settings and the need for more pressure/force on the needle knife was needed to cut tissue.

Conclusion: The model related difficulties noted above detract from the model but, nonetheless, it is useful in allowing trainees to learn the steps involved with ESD and to complete multiple excisions. After gaining experience, further training using the more realistic ex-vivo bovine rectum model is needed. 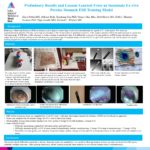