Methods: An endoscopic band ligator and snare were used for the initial mucosa incision in a porcine model. An 8-10 cm circumferential mucosal segment was then excised using standard ESD techniques. The exposed muscularis was either left without intervention (Control n=5) or received 4 quadrant, 1 cm interval injections of anti-scarring drug immediately and followed by weekly injections for up to three weeks. Three drugs were used in both high and low doses: Mitomycin C 5mg (n= 2), 0.5mg (n=2); Halofuginone 1.5mg (n=2), 0.5mg (n=2); TGFβ3 2ug (n=2), 0.5ug (n=2). The degree of esophageal stricture formation was assessed endoscopically and with a barium swallow on a weekly basis. Animals were followed clinically and euthanized when stricture formation prevented further therapy.

Conclusion: From our primary data with a small number of animals, anti-scarring drugs such as mitomycin C, halofuginone, and TGFβ3 show promise in reducing post-EESD stricture formation. Repeat experiments and further investigations on optimal dose and delivery systems need to be studied to prevent complications and determine overall efficacy of anti-scarring therapy. 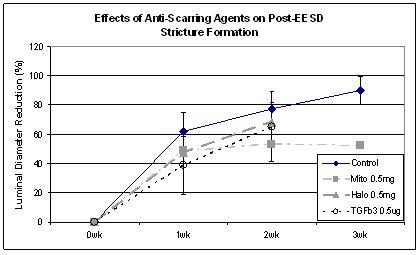