Predictors of Venous Thromboembolism in Open and Laparoscopic Bariatric Surgery

Methods and Procedures: Bariatric patients were identified in the NSQIP protocol for all types of stapled bariatric procedures except adjustable gastric banding. Stepwise logistic regression prediction models were examined for outcomes of PE and DVT.

Results: 41,445 patients underwent gastric bypass surgery (35,696 laparoscopic; 5,749 open). Table 1 shows predictors of PE and DVT in laparoscopic and open bariatric surgery. Age greater than 50, increasing body mass index (BMI) and congestive heart failure (CHF) were associated with an increased risk of DVT in the laparoscopic group while female gender decreased risk of DVT. Similarly, age over 50, increasing BMI, chronic obstructive pulmonary disease (COPD), and CHF were associated with an increased risk for PE. In open bariatric surgery, race and CHF increased the risk of DVT and CHF increased the risk of PE. Vascular disease including hypertension and previous percutaneous coronary intervention (PCI) did not increase the risk of VTE in either surgical group.

Conclusions: CHF is a significant risk factor for VTE in bariatric surgery in addition to previously identified variables of increased age, BMI, and male gender. Surgeons should consider aggressive screening and prophylaxis in patients with CHF and other risk factors in both open as well as laparoscopic bariatric surgery in order to decrease post-operative morbidity. 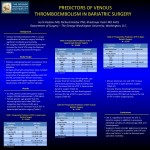