INTRODUCTION:
Pre-operative functional health status has previously been shown to affect outcomes following ventral hernia repair. As the patient population ages, there is an associated increase in comorbidities and concomitant decrease in patients’ autonomy. Within the ACS NSQIP database, progressive lack of autonomy is defined as either partial or total dependence based on the degree to which patients are able to perform acitivities of daily living. Given the trend of increasing complications in those with limited functional health status, the decision to proceed with elective hernia repair can be challenging. The objective of this study is to identify specific factors contributing to morbidity and mortality in functionally dependent patients undergoing elective ventral hernia repair. 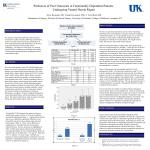