Predictors of Adenoma Detection in Colonoscopy by Gastroenterologists and General Surgeons

Introduction: Adenoma detection rate (ADR) is a major indicator of colonoscopy quality. This study looks at predictors of adenoma detection.
Purpose: To identify factors that are associated with adenoma detection in patients who undergo colonoscopy.
Methods: This retrospective cohort study was performed on adults who underwent colonoscopy in the city of St. John’s, Canada, in the year 2012. Subjects were identified through records from the health authority. Data were extracted from the electronic medical record (EMR), including both the endoscopist and nursing procedure reports. Data were recorded on a standardized data sheet and entered into SPSS version 20.0 for analysis. Univariate analysis was used to identify variables associated with adenoma detection (p<0.10) and multivariate logistic regression was used to identify variables independently associated with adenoma detection (p<0.05). Student’s T-test and ANOVA were used for continuous variables and Chi-squared test for categorical variables. An adenoma was defined as a lesion classified histologically as any of the following: adenoma, adenoma with carcinoma, sessile serrated adenoma/polyp, serrated adenoma, serrated adenoma with dysplasia, traditional serrated adenoma.

Conclusions: Adenomas were detected more frequently in male patients, patients of increasing age, patients with CRC and for a number of indications. Two endoscopists and two nurses had statistically significantly greater ADRs than the lowest detectors. 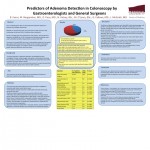