Predictive Factors of 30-day Readmission after Bariatric Surgery in a Publicly-funded Bariatric Center: A Multivariate Analysis 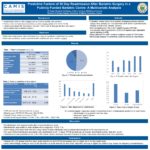