METHODS: After IRB approval, the medical records of all patients at our institution who underwent elective laparoscopic sigmoidectomy with anastomosis for diverticulitis between 05/2007 and 07/2011 were reviewed. Collected variables were demographics, body mass index (BMI), comorbidities, American Society of Anesthesiology (ASA) score, previous abdominal surgeries, presence of abscess or fistula, number of diverticulitis attacks, approach type (laparoscopy or hand-assisted), conversion to open, postoperative complications, and hospital stay. These variables were compared between patients who had or did not have postoperative complications. Student’s t-tests and chi-squared tests were performed to analyze continuous and categorical data, respectively. A p-value of <0.05 was considered statistically significant. All univariate predictors with p ≤ 0.2 in logistic regression analysis were included in a multivariate analysis to determine the incidence of surgical complications.

RESULTS: 199 patients underwent laparoscopic sigmoid colectomy for diverticulitis: 94 laparoscopic and 105 hand-assisted. Complications were noted in 61 patients (30.7%). The most common surgical complication was wound infection followed by ileus. In a univariate analysis, ASA, BMI, and abdominal abscess or fistula significantly correlated with postoperative complications (Table). Patients with 3 or fewer attacks had significantly more complications compared to those with 4 or more attacks. In multivariate analyses, older age and higher BMI were independently correlated with higher complication rates (odds ratio [OR] = 1.032 and 1.115, 95% confidence interval [CI] = 1.001-1.065 and 1.038-1.197, p = 0.039 and 0.002). In addition, the incidence of 4 or more attacks was independently correlated with a lower complication rate (OR = 0.485, 95% CI = 0.236-0.999, p = 0.047). 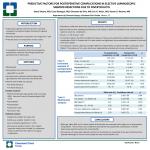