Introduction: Several factors have been associated with a higher rate of conversion in laparoscopic colorectal surgery (LCS). Conversion to open surgery is not a complication, but there is some evidence that shows a higher morbidity rate in this subgroup of patients. The aim of this study is to identify predictive factors for conversion and their impact on early postoperative recovery in terms of morbidity, hospital stay and reoperation rate. 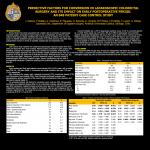