Prediction of Open Conversion in Laparoscopic Appendectomy in the Aged Population: A Neural Network Approach

In many surgical practices, laparoscopic appendectomy (LA) has become the procedure of choice for acute appendicitis. Recent data suggests that in certain subsets of the population such as the elderly, LA is associated with less cost and improved postoperative outcomes. However, the cost and morbidity associated with conversion to an open procedure presents a legitimate concern. An artificial neural network (ANN) is a computational model in which rationally selected input variables can train the system to predict a given outcome, with discriminant ability superior to multivariate logistic regression (MLR). In this investigation, we aim to use ANN modeling to predict conversion from laparoscopic to open appendectomy using known and available pre-operative variables, in patients over 55 years of age.

Using Synthetic Derivative (SD), a single-institution de-identified electronic medical record, patients over 55 who underwent laparoscopic appendectomy for acute appendicitis were identified using directed CPT and ICD code searches. Preoperative variables including demographics, comorbidities, symptoms at presentation and imaging were noted. All variables underwent univariate and multivariate screen for independent association with conversion. These factors were then input into a 4-node back-propagation training ANN (Figure 1A). The ANN output is between 0-1, with 1 representing the highest probability of conversion. Receiver operating characteristic (ROC) curves were generated for both training and validation sets, and Actual vs. ANN-Predicted plots were generated as well.

117 patients were identified as having undergone initial LA for acute appendicitis. The conversion rate was 12.8% (15/117). Of the screened preoperative factors, female gender, black race, length of symptoms prior to presentation (LOSx), platelet count and CT evidence of free fluid were found to be associated with conversion in both univariate and multivariate screen (P<0.1). 70 patients with all five variables known were included in the ANN; 56 patients were randomly chosen for the training set, and 14 were held for the validation set. Using ANN modeling, prediction of conversion generated an area under the curve (AUC) of 0.9531±0.05 in the training set (Figure 1B), and 1.0000 in the validation set. Actual vs. ANN-Predicted plots generated for the training (Figure 1C) and validation sets were generated, with r2 values of 0.8823 and 0.8171, and root mean square error (RMSE) values of 0.1200 and 0.1497, respectively.

Female gender and black race were found to be associated with conversion to open appendectomy. In addition, factors that may reflect the degree intra-abdominal inflammation, including free fluid on CT, platelet count and LOSx, were also associated with conversion. Using ANN modeling methodology, surgical candidates at high risk for conversion from laparoscopic to open appendectomy can be effectively identified, allowing for optimized patient counseling and pre-operative decision making. 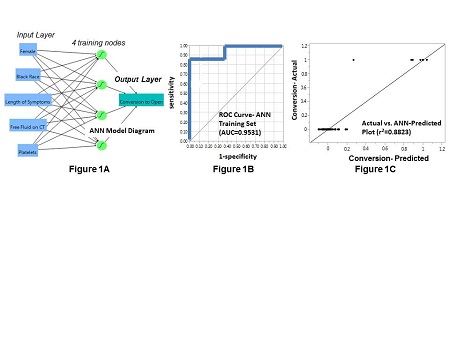