Introduction: MSA was approved for the treatment of uncomplicated GERD by the FDA in 2012 and over 5000 procedures have been done throughout the world.  Studies to date have consistently shown a failure rate of around 20%.  The aim of our study was to identify preoperative variables that may predict failure.

Methods and Procedures: Retrospective study of all patients undergoing MSA at 3 institutions by 3 surgeons from 6/2007-6/2015.  MSA failure was defined as positive pH study, esophagitis any grade, GERD-HRQL > 10, or the use of daily PPIs. Patients underwent post-operative EGD and pH studies at the discretion of the surgeon based on symptoms.

Results: 243 patients underwent MSA, 138/105 M/F, median age 53 (19-87). Mean follow up was 7.7 months (1-63).  Failure was seen in 65 (26.7%) patients. Of the 65 failures, 45 had a GERD-HRQL >10, 36 had daily PPI use, 26 patients had EGDs which showed 2 patients with esophagitis, and 10 patients had pH testing with 3 positive DeMeester scores.  There was no significant difference in any of the preoperative variables tested (Table 1).  Failures did not have a higher incidence of hiatal hernias, larger hiatal hernias, or a significant difference in hiatal hernia repairs compared to successes.   We also found no difference in preoperative supine reflux in the 146/243 (60%) of patients with that data available. Four patients had the device explanted; 1 for persistent Barrett’s (converted to Nissen), 1 for gastroparesis (underwent subtotal gastrectomy), 1 patient who had failure of the device and had a revision with a smaller device, and 1 patient was converted to a Dor fundoplication for severe dysphagia and odynophagia.  There were no erosions or migrations.

Conclusion: We have shown that there is not a higher risk of MSA failure for any of the variables typically associated with complicated GERD, including high grade esophagitis, Barrett’s esophagus, and large hiatal hernia.  Furthermore, we have demonstrated in a large series of patients that even with a very broad definition of failure, MSA continues to have a high success rate even when used in individuals with complicated GERD and therefore should not be restricted to patients with uncomplicated disease. 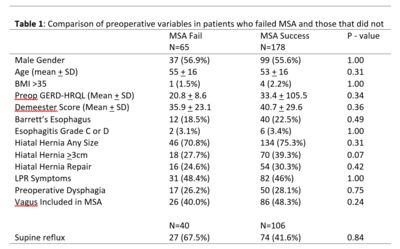