2D rigid and flexible endoscope are both emerging tools for minimally invasive surgery and interventions. One of the limitations of current 2D endoscopes is the lack of feeling of depth, which makes surgical and interventional tasks harder, as well as the recognition of lesions in the tissues. Depth perception is thus lost due to 2D endoscopic capturing and display.

Comparing to other stereo lens endoscopes, the proposed 2D to 3D conversion system do not need to change current instruments and endoscope system. It is important to note that the system doesn’t add a 3D stereo lens, but which is based on a real-time complex image processing and pattern recognition algorithm. The 2D to 3D conversion system actually does a 3D reconstruction of the surface and renders the 3D stereo image accordingly.

We tested the proposed 2D to 3D conversion system developed in our institute using a standard laparoscope and gastroscope from Karl STORZ in an experimental setting on a pig model. The system was tested by 20 different surgeons with different levels of training in endoscopy. After doing standard GS, GYN, TURP, upper GI navigation and the initial steps of gastric ESD, the perceived value recognized from surgeons was very high, especially we considered the feedback about 3D perception of organ, tissues and instruments. Meanwhile, we tested the human factor adjustment function in the proposed system which is allowed surgeons to control the 3D effect. Surgeons also gave very high ranking about this human factor adjustment function.

In this pre-clinical evaluation, the proposed 2D to 3D conversion system can generate the depth perception properly and is helpful for minimally invasive surgery and interventions. Currently a standardized testing of IRB approved 40 cases is started to validate its clinical advantage. 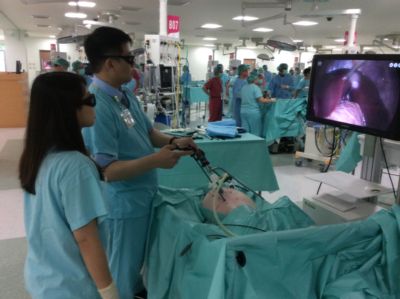