Methods: This is a cohort analysis study of prospectively collected postoperative pain data of 37 patients undergoing laparoscopic cholecystectomy between May 2011 to August 2013. Liposomal bupivacaine was introduced into the patient care in November 2012. Pain scores were assessed with visual analog scale (VAS) pain score scales in PACU (postanesthesia care unit), POD 1, & POD 7. A pain regimen with Tylenol and NSAIDS (tramadol for patient who could not tolerate NSAIDS) was standardized. Comparative Kruskal-Wallis analysis was used for pain scores POD 1 on patients with liposomal bupivacaine vs. patients with regular bupivacaine.

Conclusions: This small study did not show a significant pain difference on POD 1 between patients receiving EXPAREL® compared to regular bupivacaine for patients undergoing laparoscopic cholecystectomy. Given the large standard variation and small patient number, the question warrants future analysis with a larger patient population. 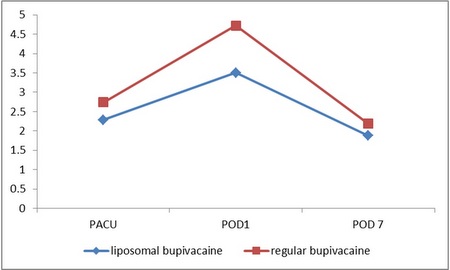