INTRODUCTION: Gastric resection is a primary treatment modality in management of patients with gastric cancer, but can be accompanied by significant morbidity. The ability to identify those patients at highest risk for postoperative morbidity would be useful for appropriate patient counseling, and may impact decision making about the timing of chemotherapy for those patients who need it. We sought to create a simple risk scale that can be used at the bedside to predict post-operative complication rate of gastric resection for malignancy.

METHODS: The Nationwide Inpatient Sample (NIS) administrative database was used to create a risk scale. Patients >18 years old were included if they had a diagnosis of gastric cancer and underwent partial or total gastrectomy as identified by ICD-9 codes. Patients were excluded if they had peritoneal disease. Multivariate logistic regression analyses were used to create a predictive model of post-operative complications, and subsequently to construct a risk scale for predictive biologic and non-biologic patient and hospital factors.

RESULTS: From 1998-2011, a total of 24,538 patients were identified. The average post-operative complication rate was 37.7%. Independent patient predictors of complications incorporated in the risk scale included gender, age, insurance status, alcohol use, and comorbid disease (cardiovascular, pulmonary, renal, diabetes, and malnutrition) (Figure 1a). Calibration of risk scores revealed a good agreement between observed and expected complication rates at each risk score (Figure 1b). A linear correlation was identified showing 23% risk for patients with a score of zero and an increased risk of 4.5% for every numeric increase in score (max>=8). Sensitivity and specificity for each score were calculated and able to divide into low risk (score<4) and high risk (score>=4) patients. Low risk patients had an overall complication risk of 32.5% while high risk patients had risk of 42.8% (OR 1.55, p<0.001). Subset analysis was able to be performed for individual complications (leak, reoperation, myocardial infarction, and gastrectomy-specific complications) with significant findings. 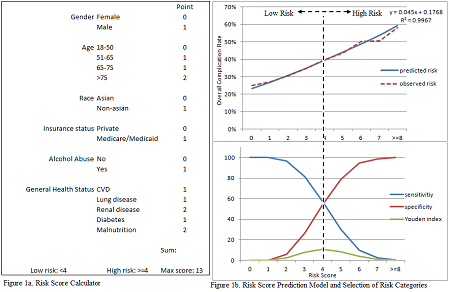 CONCLUSION: A simple risk score developed in an extensive patient cohort may accurately predict the post-operative complication risk of gastric resection for cancer while taking into consideration both patient and hospital factors. This is useful for pre-operative decision making and patient counseling without need for online calculators.