Laparoscopic splenectomy has become the surgical procedure of choice in the therapy of various hematologic diseases. Portal vein thrombosis (PVT) is a well known complication of splenectomy, but the true incidence is not well established with several reports of up to 50% incidence. Massive splenomegaly is considered a risk factor for developing post operative PVT.

The aim of this study was to assess PVT incidence after laparoscopic splenectomy for massive splenomegaly in our institution.

The records of all patients who underwent laparoscopic splenectomy between 2003 and 2008 at Shaare Zedek Medical Center, and who were found to have a large spleen (>850 g), were reviewed retrospectively. Patients who had fever, abdominal pain or other symptoms suggestive for abdominal pathology had further imaging studies. The presence of portal vein thrombosis was determined by a color Doppler ultrasound or abdominal Computed Tomography.

During the study period, out of 96 patients who underwent laparoscopic splenectomy , 28 patients had massive splenomegaly(17 male, 11 female) with Mean spleen weight of 2135 g. Fourteen had Doppler ultrasound (50%); six (21.4%) had abdominal CT examination. All patients received prophylactic anticoagulant treatment during peri-operative period. PVT was diagnosed in two of 20 patients who had imaging studies (10 %).One patient had mild elevation in liver function test. Both patients were treated with low molecular weight heparin without any further adverse consequences.

In contrast to several previous reports in the literature, our results suggest that the incidence of portal vein thrombosis after laparoscopic splenectomy, may be lower than expected, even in patients with large spleens. 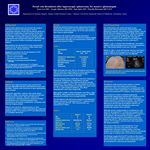