METHODS AND PROCEDURES – Senior residents participated in a four-tiered SILS curriculum. Baseline demographic information i.e. experience with laparoscopy was collected. Residents completed a baseline fundamentals of laparoscopic skills test. Stage 1 was a computer based didactic module and quiz requiring a passing score to move to the next stage. Stage 2 included a box-training component where five skills (peg transfer, cutting, ligation, and extracorporeal and intracorporeal suturing) were practiced and exit testing was performed. Stage 3 consisted of a porcine lab during which residents performed either a single-incision cholecystectomy or appendectomy. Participants were assessed with a modification of a validated global operative assessment tool scoring depth perception, bimanual dexterity, efficiency, tissue handling, and autonomy, as well as a procedural check-list. The final stage involved assessment of the residents in the operating room performing a single-incision cholecystectomy on a real patient using the same operative assessment instrument. Residents were encouraged to practice between stages either in the skills lab or on a home box trainer provided to them.

RESULTS – Twenty-two surgical residents [PGY3-5] participated in the curriculum. Subjects reported that the stage 1 didactic module provided a solid basic knowledge of SILS. Pre- and post-test scores confirmed knowledge gains after the stage 1 tutorial. Mean scores increased from 38 ± 13 to 92 ± 5 (P<0.01). Fifty-nine percent achieved passing scores on the box-trainer component; however, this did not predict performance on the porcine model 37.5 ± 6.8 v 31.2 ± 6.6 (P>0.05). Five subjects have performed single-incision cholecystectomy in the operating room to date. Three of five were able to complete the procedure under supervision, but without faculty intervention, while the remaining two were able to complete the procedure with moderate guidance. Residents reported that the porcine lab provided an excellent opportunity to improve their SILS skills, but were neutral about the box trainer module.

CONCLUSIONS – Each of the five residents completing all four stages of this SILS curriculum were able to successfully perform a supervised SILS cholecystectomy in a live patient with zero to moderate faculty guidance. A step-wise curriculum to teach SILS appears to translate into successful performance in the operating room. 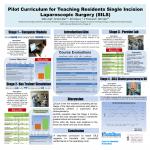