METHODS: Four prostheses with absorbable barriers were evaluated (C-QUR, Atrium Medical Corporation; PROCEED, Ethicon Incorporated; Sepramesh IP Composite, CR Bard; Parietex Composite, Covidien) as well as three with nonabsorbable barriers (Composix E/X, CR Bard; Composix L/P, CR Bard; DUALMESH, W.L. Gore and Associates). Digital photos were taken of each mesh, and Image J software was utilized to determine the shape, area, and dimensions of the interstices of each mesh. The number of interstices were counted both parallel and perpendicular to the longest dimension of the interstices, and the individual mesh fiber diameter was measured relative to the scale bar. A digital, laser micrometer was utilized to determine the thickness of each mesh, and a balance was utilized to determine density. An Instron materials testing system was utilized to perform extensive testing on each mesh including: suture retention strength, tear strength, uniaxial tensile, and ball burst testing. Specimens were evaluated with meshes oriented both parallel and perpendicular to their longest dimension. A one-way ANOVA with Tukey’s post-test was performed to determine whether significant differences exist between mesh types. An unpaired, two-tailed, t-test was also performed to determine whether significant differences exist within each mesh type due to mesh orientation (parallel or perpendicular). Significance was set at the 0.05 level.

CONCLUSIONS: Significant differences exist between the physicomechanical properties of composite barrier prostheses commonly utilized for laparoscopic ventral hernia repair. Sepramesh and Composix E/X demonstrated significantly greater suture retention, tear, and burst strengths compared to other meshes evaluated. Orientation of the mesh also proved to be a significant determinant of mesh properties and as such should be considered during placement in order to provide adequate repair strength. 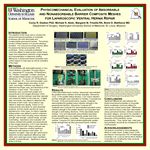