Background: Achalasia is a rare esophageal motility disorder with a low incidence of 1/100 000 per year in general people. Peroral endoscopic myotomy (POEM), reported in the management of achalasia patients in 2010, has been constantly compared with standard laparoscopic Heller myotomy in most recently. However, the existing literatures are small sample size, lacking convincing evidence. So we conducted this meta-analysis pooling published data on comparison of POEM with laparoscopic Heller myotomy for achalasia.

Methods: Electronic databases of PubMed, Cochrane Central Register of Controlled Trials, Cochrane Database of Systematic Reviews and Embase (up to December 2013) were systematically searched. EndNote X6 citation software was used for literature management. A modification of the Newcastle-Ottawa Scale was applied for quality assessment. The data were analyzed using Review Manager (Version 5.1), and sensitivity analysis was performed by sequentially omitting each study.

Conclusion: POEM achieves equivalent short- and long-term outcomes compared with laparoscopic Heller myotomy for achalasia. This novel procedure is recommended as a promising treatment for achalasia. 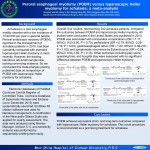