Introduction Laparoscopic Sleeve Gastrectomy (SG) is increasingly being performed as a one stage procedure with short and medium term weight loss and improvement in obesity associated co-morbidities comparable to Roux-en-Y Gastric Bypass (RYGB). The aim of our study was to evaluate our experience with SG in terms of peri-operative outcomes and improvement of glucose control and decrease in hypoglycemic medication use over the short to medium term.

Methods and Procedure A retrospective review of all SGs performed at a university teaching hospital was conducted. A six port technique was used. A 15mm optical trochar was placed in the left upper quadrant (LUQ) for insufflation. The distal transection point was 5cm from the pylorus. A 42 F bougie was used to size the sleeve. At the gastro-esophageal junction (GEJ), 1cm of fundus was preserved. Routine buttress material was not used. Selective clipping and suturing was performed for staple line bleeding with routine endoscopy to assess for luminal bleeding and extraluminal leaks.

Conclusions SG is a safe and effective primary weight loss procedure with improvement of diabetes mellitus up to one year. A national bariatric surgery data registry would improve long term follow-up. 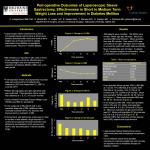